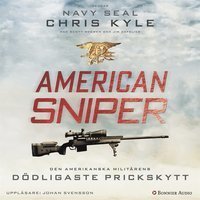 Former U.S. Navy SEAL Chris Kyle tells the story of his legendary career, from 1999-2009, during which time he recorded the most confirmed sniper kills (officially a record 155, though the real number is even much higher) in the history of the United States military, any branch, from 1776 to present. Nicknamed The Legend by his fellow SEALS, Kyle's service in Iraq and Afghanistan earned him seven medals for bravery, including two Silver Stars. With the pacing of thriller, "American Sniper" vividly recounts Chief Kyle's experiences at key battles, including the March on Baghdad (beginning of Iraq War), Fallujah, Ramadi, and Sadr City. He was shot in both the helmet and back; he witnessed the death of his two closest friends. After his combat deployments, Kyle became the SEAL's chief sniper instructor, and he literally wrote the book on being a sniper: the Naval Special Warfare Sniper Doctrine, which is the first Navy SEAL sniper manual. Today he is the CEO of an international security and training corporation. "American Sniper" is the story of the accomplishments of a husband and father who went from a Texas rodeo cowboy to his country's most legendary sniper. It describes the challenges of keeping a marriage and family together, and how after four deployments, Kyle ultimately chose to return to his wife and two children. This is also the story of the men of SEAL Team 3 who fought and died as brothers with Kyle. "American Sniper" provides a rare, first-hand glimpse at the elite world of the SEALs and combat snipers who fought in a war where the "Rules of Engagement" only allowed for precise surgical strikes at the heart of a well-trained and well-organized opposition force, which had virtually no "Rules of Engagement".

Former U.S. Navy SEAL Chris Kyle tells the story of his legendary career, from 1999-2009, during which time he recorded the most confirmed sniper kills (officially a record 155... END_OF_DOCUMENT_TOKEN_TO_BE_REPLACED